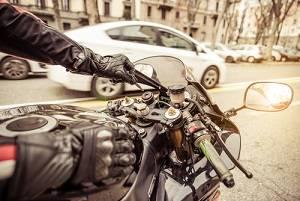 Riding a motorcycle can be an exhilarating experience, but it can also lead to dangerous situations depending on how the rider and car drivers share the road. Experienced riders may feel more comfortable making maneuvers, such as lane splitting through traffic, that other riders may not, but even experienced riders can get injured if they make a move alongside a careless driver or without exercising due caution.

What Is Lane Splitting?

Lane splitting is not considered illegal in California although it is not expressly permitted under any law in the state. A motorcycle rider lane splits when he rides his motorcycles in between traffic lanes. California is the only state that does not outlaw lane splitting. Lane splitting can be dangerous for the rider and for the cars because a driver may not necessarily be expecting a motorcycle to be lane splitting, and may make a move into the other lane and collide into the rider. In addition, a rider could hit a car and fall into oncoming traffic, getting seriously injured or killed in the process. However, one of the biggest advantages of lane splitting to riders is that they avoid the risk of sitting in traffic and getting rear ended by other cars driven by distracted drivers waiting out a traffic jam.

If a rider is injured when making an illegal traffic maneuver, he may not recover as much in compensation for the accident under California’s comparative fault system. Because lane splitting is not illegal in California, it cannot be used as an automatic basis to deny compensation in a personal injury case. However, if the rider was not careful and was negligent by speeding between lanes, failing to properly indicate to other drivers that he was about to move in and out of traffic, or otherwise failing to exercise caution, he may not recover the full amount of compensation due for his injuries.

If you suffered injuries while riding a motorcycle, especially from an accident with a careless driver, you can seek compensation for your injuries. For a free consultation, contact a passionate San Jose auto accident lawyer at Janoff Law at 408-286-2300. We will help you explore your options and work toward recovering the fair compensation you deserve.