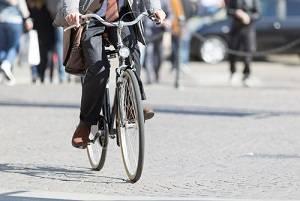 Cycling in the city can be dangerous, and bicycle accidents are common. California has traffic laws to protect city cyclists, but they still have to deal with a heavy flow of traffic and pedestrians. Many cities have bike lanes, but they are not always respected by vehicles or pedestrians. Cities pose special dangers to cyclists, but there are safety measures that cyclists can take to protect themselves.

Possibly the biggest difference between cities and suburban or rural areas for cyclists is the sheer quantity of vehicles on the streets. Car doors are among the most common hazards in city cycling. Drivers and passengers open car doors unexpectedly without checking for bicycles, and collisions are often the result.

These kinds of accidents can be hard to avoid for cyclists riding close to parked cars. It is best to ride far enough away from stopped and parked cars so that if their doors are opened, they will not make contact with the cyclist. It is not always possible, however, to avoid the dangerous zone close to vehicles, so cyclists riding next to cars should slow down and look for brake lights, taxi vacancy lights, and other signs of opening doors.

Intersections, traffic lights, and stop signs also pose risks for city cyclists. Often, cars at a light or stop sign will look left for oncoming traffic, then turn right across a bike lane without checking for cyclists, which can result in serious collisions and injuries.

Cars also may unexpectedly make right turns into parking spots, driveways, or parking lots. It is important to stay vigilant and maintain enough space to get out of the way of turning cars.

One benefit to city cycling is the bike lanes that are common on city streets. However, drivers sometimes park in the bike lane rather than looking for a legal parking spot. This can be more than an inconvenience for cyclists. Cars parked or stopped in the bike lane can be a serious safety hazard if cyclists do not have enough time to see and avoid the parked cars, or if the cyclist must ride dangerously close to traffic to go around stopped cars.

Riding a bicycle amongst the city crowds, especially alongside faster cars, can be intimidating. However, California’s Three Feet for Safety Act requires drivers to maintain a minimum distance of three feet between their vehicles and cyclists while passing.

It can be difficult for drivers to gauge a safe distance between their vehicles and bicycles, and they may not understand the danger they pose to cyclists by passing close. One benefit of the congestion and traffic, though, is that vehicles generally travel at a slower rate, giving cyclists the opportunity to take control of the situation and claim their space on the road, as well as increasing the amount of time that cyclists have to react to a hazard on the road.

In addition to the multitude of automobiles, cities are filled with pedestrians. Cyclists must be extra careful around pedestrians, who are apt to make sudden movements. Pedestrians often dart into the paths of cyclists or cross streets without watching for bicycles, so cyclists must be aware and be careful. Accidents involving pedestrians are generally less serious than collisions involving motor vehicles, but they can still result in severe injuries.

If you have been injured by a car or truck while riding your bicycle due to another’s carelessness or negligence, please contact an experienced San Jose car accident lawyer. Call Janoff Law at 408-286-2300 for a free, no-obligation consultation today.